In 2015, I wrote an article about how the palette color quantization was improved in FFmpeg in order to make nice animated GIF files. For some reason, to this day this is one of my most popular article.

As time passed, my experience with colors grew and I ended up being quite ashamed and frustrated with the state of these filters. A lot of the code was naive (when not terribly wrong), despite the apparent good results.

One of the major change I wanted to do was to evaluate the color distances using a perceptually uniform colorspace, instead of using a naive euclidean distance of RGB triplets.

As usual it felt like a week-end long project; after all, all I have to do is change the distance function to work in a different space, right? Well, if you're following my blog you might have noticed I've add numerous adventures that stacked up on each others:

And when I finally reached the point where I could make the switch to OkLab (the perceptual colorspace), a few experiments showed that the flavour of the core algorithm I was using might contain some fundamental flaws, or at least was not implementing optimal heuristics. So here we go again, quickly enough I find myself starting a new research study in the pursuit of understanding how to put pixels on the screen. This write-up is the story of yet another self-inflicted struggle.

But what is palette quantization? It essentially refers to the process of reducing the number of available colors of an image down to a smaller subset. In sRGB, an image can have up to 16.7 million colors. In practice though it's generally much less, to the surprise of no one. Still, it's not rare to have a few hundreds of thousands different colors in a single picture. Our goal is to reduce that to something like 256 colors that represent them best, and use these colors to create a new picture.

Why you may ask? There are multiple reasons, here are some:

Following is an example of a picture quantized at different levels:

This color quantization process can be roughly summarized in a 4-steps based process:

The study here will focus on step 2 (which itself relies on step 1).

A palette is simply a set of colors. It can be represented in various ways, for example here in 2D and 3D:

To generate such a palette, all sort of algorithms exists. They are usually classified into 2 large categories:

Since I'm working within FFmpeg, speed has always been a priority. This was the reason that motivated me to initially implement the Median-Cut over a more expensive algorithm.

The rough picture of the algorithm is relatively easy to grasp. Assuming we want a palette of K colors:

You may have spotted in this video that the colors are not expressed in RGB but in Lab: this is because instead of representing the colors in a traditional RGB colorspace, we are instead using the OkLab colorspace which has the property of being perceptually uniform. It doesn't really change the Median Cut algorithm, but it definitely has an impact on the resulting palette.

One striking limitation of this algorithm is that we are working exclusively with cuboids: the cuts are limited to an axis, we are not cutting along an arbitrary plane or a more complex shape. Think of it like working with voxels instead of more free-form geometries. The main benefit is that the algorithm is pretty simple to implement.

I pondered about that for a quite a long time.

An overview of the possible heuristics

In bulk, some of the heuristics I started thinking of:

I tried to formalize these questions mathematically to the best of my limited abilities. So let's start by saying that all the colors c of given box are stored in a N×M 2D-array following the matrix notation:

N is the number of components (3 in our case, whether it's RGB or Lab), and M the number of colors in that box. You can visualize this as a list of vectors as well, where c_{i,j} is the color at row i and column j.

With that in mind we can sketch the following diagram representing the tree of heuristic possibilities to implement: 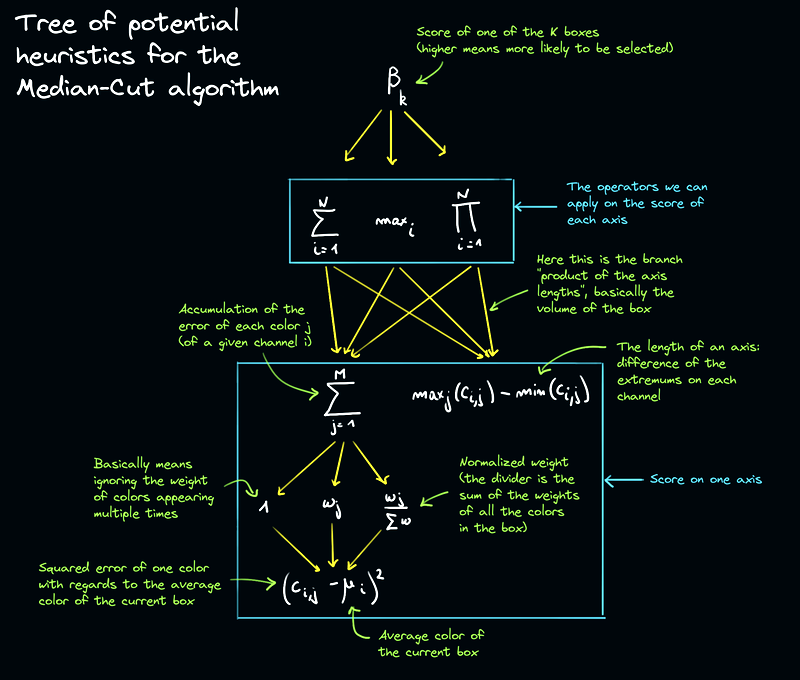 Mathematicians are going to kill me for doodling random notes all over this perfectly understandable symbols gibberish, but I believe this is required for the human beings reading this article.

In summary, we end up with a total of 24 combinations to try out:

If we start to intuitively think about which ones are likely going to perform the best, we quickly realize that we haven't actually formalized what we are trying to achieve. Such a rookie mistake. Clarifying this will help us getting a better feeling about the likely outcome.

I chose to target an output that minimizes the MSE against the reference image, in a perceptual way. Said differently, trying to make the perceptual distance between an input and output color pixel as minimal as possible. This is an arbitrary and debatable target, but it's relatively simple and objective to evaluate if we have faith in the selected perceptual model. Another appropriate metric could have been to find the ideal palette through another algorithm, and compare against that instead. Doing that unfortunately implied that I would trust that other algorithm, its implementation, and that I have enough computing power.

So to summarize, we want to minimize the MSE between the input and output, evaluated in the OkLab colorspace. This can be expressed with the following formula:

Special thanks to criver for helping me a ton on the math area, this last formula is from them.

Looking at the formula, we can see how similar it is to certain branches of the heuristics tree, so we can start getting an intuition about the result of the experiment.

Short deviation from the main topic (feel free to skip to the next section): working in C within FFmpeg quickly became a hurdle more than anything. Aside from the lack of flexibility, the implicit casts destroying the precision deceitfully, and the undefined behaviours, all kind of C quirks went in the way several times, which made me question my sanity. This one typically severly messed me up while trying to average the colors:

Anyway, I know this is obvious but if you aren't already doing that I suggest you build your experiments in another language, Python or whatever, and rewrite them in C later when you figured out your expected output.

Re-implementing what I needed in Python didn't take me long. It was, and still is obviously much slower at runtime, but that's fine. There is a lot of room for speed improvement, typically by relying on numpy (which I didn't bother with).

I created a research repository for the occasion. The code to reproduce and the results can be found in the color quantization README.

In short, based on the results, we can conclude that:

To my surprise, normalizing the weights per box is not a good idea. I initially observed that by trial and error, which was actually one of the main motivator for this research. I initially thought normalizing each box was necessary in order to compare them against each others (such that they are compared on a common ground). My loose explanation of the phenomenon was that not normalizing causes a bias towards boxes with many colors, but that's actually exactly what we want. I believe it can also be explained by our evaluation function: we want to minimize the error across the whole set of colors, so small partitions (in color counts) must not be made stronger. At least not in the context of the target we chose.

It's also interesting to see how the max() seems to perform better than the sum() of the variance of each component most of the time. Admittedly my picture samples set is not that big, which may imply that more experiments to confirm that tendency are required.

In retrospective, this might have been quickly predictable to someone with a mathematical background. But since I don't have that, nor do I trust my abstract thinking much, I'm kind of forced to try things out often. This is likely one of the many instances where I spent way too much energy on something obvious from the beginning, but I have the hope it will actually provide some useful information for other lost souls out there.

There are two main limitations I want to discuss before closing this article. The first one is related to minimizing the MSE even more.

We know the Median-Cut actually provides a rough estimate of the optimal palette. One thing we could do is use it as a first step before refinement, for example by running a few K-means iterations as post-processing (how much refinement/iterations could be a user control). The general idea of K-means is to progressively move each colors individually to a more appropriate box, that is a box for which the color distance to the average color of that box is smaller. I started implementing that in a very naive way, so it's extremely slow, but that's something to investigate further because it definitely improves the results.

Most of the academic literature seems to suggest the use of the K-means clustering, but all of them require some startup step. Some come up with various heuristics, some use PCA, but I've yet to see one that rely on Median-Cut as first pass; maybe that's not such a good idea, but who knows.

Another more annoying problem for which I have no solution for is with regards to the human perception being much more sensitive to light changes than hue. If you look at the first demo with the parrot, you may have observed the boxes are kind of thin. This is because the a and b components (respectively how green/red and blue/yellow the color is) have a much smaller amplitude compared to the L (perceived lightness).

Here is a side by side comparison of the spread of colors between a stretched and normalized view:

You may rightfully question whether this is a problem or not. In practice, this means that when K is low (let's say smaller than 8 or even 16), cuts along L will almost always be preferred, causing the picture to be heavily desaturated. This is because it tries to preserve the most significant attribute in human perception: the lightness.

That particular picture is actually a pathological study case:

We can see the hue timidly appearing around K=16 (specifically it starts being more strongly noticeable starting the cut K=13).

For now, I'm mostly done with this "week-end long project" into which I actually poured 2 or 3 months of lifetime. The FFmpeg patchset will likely be upstreamed soon so everyone should hopefully be able to benefit from it in the next release. It will also come with additional dithering methods, which implementation actually was a relaxing distraction from all this hardship. There are still many ways of improving this work, but it's the end of the line for me, so I'll trust the Internet with it.