Making development board cases with ShimonBox

Collecting ARM development boards has become a disease I've been carrying for a while now. Welcoming a new board to the family is always filled with hope for a better future. But the ARM support in Linux being what it is, only deception, anger and betrayal remain. Making use of the new board soon becomes a distant dream, and it ends up with the other devilkins in a forgotten corner of my desk.

Nevertheless, I felt the need to design and 3D print individual coffins for them. This led me into a long and painful OpenSCAD adventure resulting in the birth of the ShimonBox project. 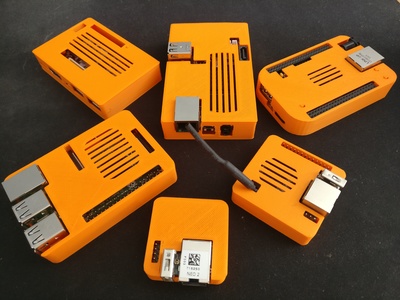 The name comes from Simon "The Digger" in Tengen Toppa Gurren Lagann. The dude is drilling like a madman, which is basically the concept I'm using in ShimonBox. 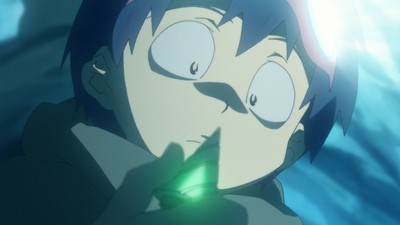 Let me elaborate on this. The project is split in 3 main parts:

The boards .scad files mainly define the plate and components dimensions, their size and positions. From this, we can basically generate a bounding box drilling far in some direction. This is what it typically looks like (in red): 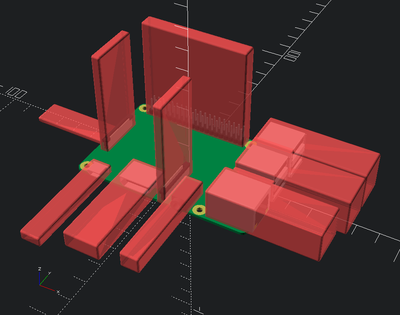 Since the boards' .scad files also define a 2D shape of the plate, it can be vertically extruded into a large block which is then mined by that bounding box to fit the board. This is the main principle I use to get a generic case layout following the board design.

You may also notice the bounding box is actually including a padding and a smoothing (thanks to minkowski()) to have a safer and cleaner case.

The board definitions contain most of the information required to design a case. This means that if you want to build your own case, you can still use ShimonBox. For example, with the Cubieboard you can do something like:

You can also use the cubieboard_plate_2d() module and obtain the board information by calling cubieboard_info(). Oh, and you will find bounding_box() in utils.scad.

While this could be considered completely irrelevant to the problem the project is supposed to solve, I tried to make the board designs look pretty and close to how they appear in reality in order to get a neat semi professional output.

The GIF animations are obtained by generating 300 high resolution images using openscad with a fixed camera position, and then running a 2-pass FFmpeg on them to obtain a 4x downscaled output. That manual multi-sampling technique gives a relatively good anti-aliased result. The openscad calls can be run in parallel thanks to GNU/Make. The curious can have a look to /common.mk for the details.

But what matters is what defines a board in the project. A typical board .scad file contains the following:

This may look like a long list, but the files are actually small. Some information on the other hand may look relatively redundant; this is due to the language limitations of OpenSCAD. While I tried my best to prevent it, at some point you have to deal with two completely incompatible models: the modules versus the functions, for which you have to create a bridge. I'll expand on that in a later section.

Something you may wonder about is "why do you have to specify a bounding box dimension for every component in your board definition?". That's a legitimate concern; after all, components like USB slots are typically all the same, that's standardized. Well, not really. In practice, the length of the slot itself varies, sometimes the tip has no folding, the thickness may actually be different... And this is true for basically all electronics. So for every board, you will actually have to measure again all your components.

Beside the parametric model of the component, there is one important setting: the direction it is facing: horizon, sky or nowhere. This will define the drilling direction.

The positioning of the component on the board can be overwhelming because it relies on several parameters:

To help not getting lost in space while reconstructing the board, set_components() has an extra debug option to show up the component corner reference: 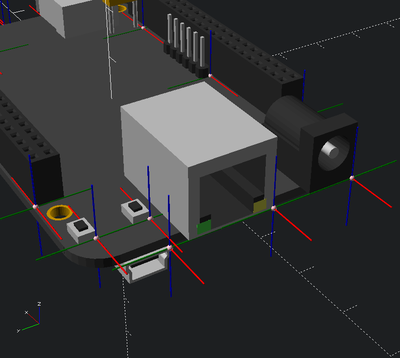 When the board is defined, there is really not much left to do. The case .scad files only contains 2 pieces of information:

If you look at a typical case definition, the file is a few lines of glue code. But if you open it within openscad, you will get a full featured case split in 2 or 3 parts (depending on the need for button pushers or not).

All the logic happens in the /case.scad file. It's not actually a lot of code (less that 300 lines currently).

Some lessons with OpenSCAD

Working on a complex project with OpenSCAD for a few months gave me a large overview of the software, so I feel like sharing some feedback on it.

Let's be honest, OpenSCAD is a solid piece of software (I can't remember a single crash), the syntax is very clean and simple, and its parametric nature is priceless. The native live editing with your own editor is also extremely handy. The preview is fast enough, and overall the experience was pretty intuitive all along.

The community is also extremely supportive, and I'll have to thank in particular teepee and InPhase from IRC for their valuable help. Oh, and they even added me to the official OpenSCAD gallery. Great people ;)

OpenSCAD is also as far as I know the only free software that could achieve what I did with ShimonBox.

Now of course, my toxic hater nature can not be silenced so easily, so I'll share a few critics.

I'll probably continue melting PLA for various other boards I have (the two previous RaspberryPi generations and a Odroid C2). I'll write some documentation and tutorial as soon as I can on how to contribute easily (this blog post is a good start though). And maybe the incredible popularity of this project will give some people the irresistible urge to send me new boards so I can add them in the collection.