In my previous post, I tried to build a map of the Kanjis. The result was barely useful, and not very satisfying. Since then, I've been pointed out various other interesting Kanji learning sources, but very few graphing solutions.

After trying Springy.js, it appeared that 2D was too limited for what I wanted to achieve.

That's when I came across a pretty awesome software, UbiGraph. I recommend having a look to the demos, it's really simple to use, faster than the other 2D solutions I tried, and well, the positioning of the nodes is working just as expected. That last point may sound obvious, but that was the main issue I had with Graphviz.

Unfortunately, I quickly had to face two main issues:

Since I wanted to try that engine anyway, I decided to come up with a hack to support Unicode. The complete source code of the hack is linked at the end of the article.

Hook into the server

First, just a summary on how that software works. It's essentially a server (bin/ubigraph_server) which spawns a black OpenGL window. Then you have the possibility with various language interfaces to connect to it and add nodes and links. After each operation the server window gets updated and you can dive into your graph.

Now the idea is to have such code working:

Looking at the ubigraph_server binary, we can guess that what is used to display the text labels is the glutBitmapCharacter function:

After a few tests, it was confirmed that this function was called with character taking the value of 0xe5, 0xa5 and 0xbd; basically the UTF-8 encoded 好.

This function then lookups into hardcoded character tables and display the character with a glBitmap() call, which also moves the raster position for the next character.

In order to make this function supports UTF-8, a few hacks were required. First, we need to redefine this function. The most simple way of achieving this is obviously to use LD_PRELOAD to point on a kanjimod.so redefining the glutBitmapCharacter function.

The second step was to reconstruct the UTF-32 code with the provided character byte by byte. The simplest way of doing this is just to abuse various static variables into the function context.

It looks like this (code heavily based on FFmpeg's code):

At this point, val contains the UTF-32 character code. Next, we need a rasterizer to get the glyph bitmap to blend. The most obvious choice was to use FreeType.

Instead of using a static for the FreeType initialization state in glutBitmapCharacter(), I decided to add a hook on glutInit():

To display the characters, I kept most of the GL code from the original glutBitmapCharacter(). Basically, no anti-aliasing, and thus using a 1 bit per pixel bitmap. Following is the relevant code:

With such code I was able to achieve the main purpose of the hack: 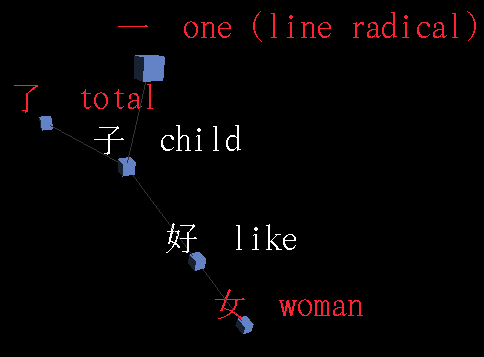 In the previous post, I was using some official Kanjis dictionaries. While they are pretty complete, they kind of lack some educational properties. So in order to improve the usefulness of the output, I decided to rely on Kanji Damage database.

Of course, extracting the database from the website was a bit boring work. I did exactly what good programmers tend to dislike: use shell scripts and regex to parse HTML and extract the content. And I don't give a fuck.

The database order of the Kanjis is relevant for educational purposes. The author also added "invented" radicals that don't actually exists but greatly help the learning. Those radicals, such as the standing worms don't have a matching character, so we can't use FreeType to render them in the graph. To add the picture support, the code was adjusted to replace strings such as [69] with the appropriate bitmap. The bitmap table is generated using a simple python script opening the PNG files from the site and generating C code.

Here is a demo of the mod in action (without the English translations to avoid a too cluttered output):

In red the radicals, in green the invented radicals, and in white the remaining Kanjis.

The full code of the mod and the instructions on how to use it are available on my Github.