When I started working on video related stuff, I didn't expect that one of the biggest issue will be to deal with a bunch of acronyms, organization names such AES, DVB, EBU, ETSI, IEC, IEEE, IETF, ISMA, ISO, ITU, SMPTE, ... The standardization and broadcasting worlds are not accessible at first, and can be very confusing for the mainstream. This blog post will try to popularize a little how everything is related.

Since this is basically an overview, a lot of things I'll say here will look obvious and I will not enter in the details.

All Paths Lead To MPEG

One of the first word you hear when you enter in the Audio/Video world is "MPEG". At some point you realized this acronym is used to define an obscure group of persons, some kind of video format, but also a codec, and actually a bunch of other things which make almost everything related to video linked by one mean or another to this enigmatic MPEG.

But in order to get a grip on all of this, a few things need to be clarified first, especially concerning the ISO and various other related organizations, unions, societies, groups or whatever they like to call themselves.

When we talk for example about the MPEG-1, we are actually talking about the standard ISO/IEC 11172. What does that mean?

The ISO is the International Organization for Standardization. As the name suggest, this organization is responsible for writing standards, which are by the way not only related to digital video broadcasting. Note these standards are most of the time NOT free to download, you need to pay to read them. The restricted list of free ISO standards is available.

What about the IEC? What's actually happening here with MPEG-1 is simply that the ISO is cooperating with the IEC (or International Electrotechnical Commission) to write this standard. They form the ISO/IEC JTC 1, or Joint Technical Committee 1. 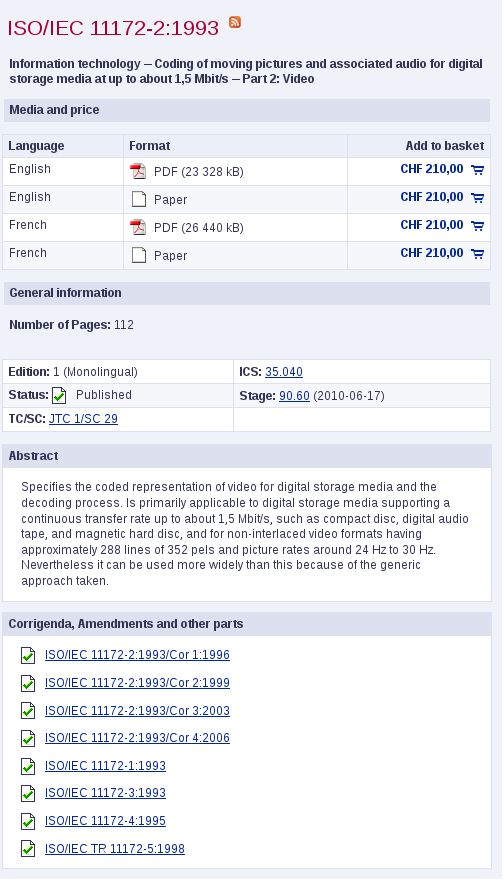 First, the extra -1 is the part of the standard. Indeed, this standard is split into 5 different parts (Systems, Video, Audio, Compliance testing and Software simulation).

Then come the date, 1993. This is the first public release, or first edition. Some modifications are sometimes needed (corrections, or amendments). For example, the part 1 was revised a first time in 1996, which led to ISO/IEC 11172-1:1993/Cor 1:1996. This paper and the following other updates are free to download unlike the original release (of course, they have not much meaning without the main paper).

Some parts are written later than others. For example, the software simulation (part 5, providing a reference implementation) was released in 1998. This part 5 is a bit special, with a TR in its name, which means technical report.

Note the part order is arbitrary and not chronological; for instance, the MPEG-4 part 14 was written before MPEG-4 part 12 (we will go back on them later).

A group of experts

When we said the MPEG-1 standard was written with a cooperation group between ISO and IEC, this meant a working group was formed. Its full name is ISO/IEC JTC1/SC29 WG11, or Joint Technical Committee 1, Subcommittee 29, Working Group 11. This group is called MPEG or Moving Picture Experts Group. They by the way own a website.

A similar group is the ISO/IEC JTC1/SC29/WG1, or Joint Photographic Experts Group, commonly known as JPEG (ever heard of the JPEG/JFIF file format?)

These two working groups are part of the Subcommittee 29 (SC29), which is dedicated to multimedia coding research (officially Coding of audio, picture, multimedia and hypermedia information). 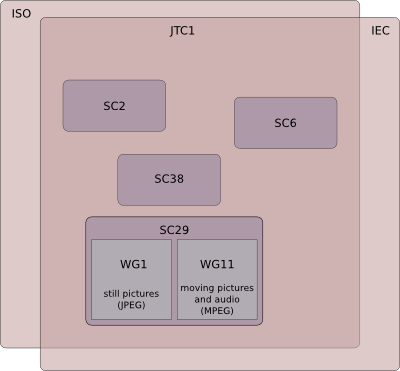 and a bunch of standards

The MPEG group actually wrote a bunch of standards, the most commonly known being:

The MPEG-1 is not really interesting from a broadcasting point of view. It defines a relatively simple container in the first part (Systems), and how to encode audio and video (respectively in part 3 and 2).

A few years later, the MPEG-2 standards were written and introduced two containers:

Before we enter in the MPEG-4 standards details, it is now important to mention the ITU who get involved with the MPEG group to write these standards.

The ITU (formerly CCIR) jointly developed with the MPEG some parts of the standards.

For example, in the MPEG-2 standard, the part 1 and part 2 (Systems and Video) are also respectively known as ITU-T recommendations H.222.0 and H.262. To put it simply:

You might have noticed the 'T' in ITU-T for these recommendations. The 'T' is for Telecommunications. They are also behind some Radiocommunication papers (ITU-R). For example, the popular ITU-R BT.601, or Rec. 601 (freely available on the ITU website) is being re-used in the MPEG standards and various others.

The MPEG-4 standards has a few interesting parts to note. The part 2 (Visual) defines what we know as the "mpeg4" video codec in FFmpeg. This video compression technology is based on the previously defined MPEG-1 and MPEG-2 (part 2 for both), and include a bunch of profiles targeting different applications. Using the classic DCT method, it is used as a base for several other well known codecs such as DivX or Xvid.

The MPEG-4 part 10 (known as H.264) being written conjointly with ITU, is another standard of video compression, way more effective than "MPEG-4" for various reasons. You can look for H.264 and MPEG-4 Video Compression: Video Coding for Next Generation Multimedia book by lain Richardson for more details. Since you are reading this article, you certainly have already heard about H.264 and know it is pretty widespread.

Note: x264 is a H.264 encoder software, the program you use to encode the media; it is sometimes called a codec even though it is just an encoder (and not a coder-encoder). H.264 refers to the codec standard. Other encoders than x264 exist, it is just a well known one for being pretty efficient and complete. And additionally, it is a free/libre software.

If you have already heard about H.264, you might also be a bit familiar with AAC or Advanced Audio Coding, as a lossy audio encoding standard. It is defined in the part 3 of the MPEG-4 standards. You might notice there is also an AAC part (7th) in the MPEG-2 standard, but what you are looking for is most certainly the one in MPEG-4.

AAC is simply a popular lossy audio encoding "format" more efficient than the MP3 (which is MPEG-1 or MPEG-2 audio).

What happened to the container? The MPEG-4 defines the MP4 container format in the part 14. It is interesting to note this standard is directly based upon the QuickTime Format (you know, the .mov files) released in 2001. Unlike the MP4, the QT specifications are freely available for download.

This MP4 format get then generalized later in the part 12 of the standards as ISO base media file format. It is freely available. This allowed for instance the 3GPP file format (mobile phone multimedia) and F4V to be derived from it.

We've seen mostly what the mainstream knows about (it is common to hear stuff about MPEG, or H.264/AAC in .mov or .mp4 videos). But now in this last section I'd like to make a small summary of some common knowledge in the broadcasting industry.

Just like the ISO, the SMPTE sells some copyrighted standards documents for professionals working in the broadcasting.

They are notably known for the TimeCode standardizing (see SMPTE 12M) which is used for editing purposes (identify the frames and do various scene cuts for instance), and the MXF format, being one of the most popular broadcast media container (SMPTE 377M is the base MXF document).

A few hundreds of SMPTE standards are available, and cover a lot of television/cinema production technical needs.

As the name suggests, AES is publishing a number of standards related to audio (AES3, AES10, AES11, etc.).

AES3 is accepted as a standard in the professional and broadcasting world since years, and has been widely used as one of the primary means of transmitting digital audio at the end of the chain. AES3 is by the way also known as AES/EBU, EBU being the European Broadcasting Union, which is yet another group of broadcasting engineers who mainly try to maintain collaboration and interoperability.

The DVB Project has been developing a high amount of specifications for the Digital Video Broadcasting. They for instance define some restrictions on the settings to be used with MPEG-2 as well as various recommendations for DVB applications; there are various transmissions or diffusions constraints from the broadcasters to the end user.

For example, satellite delivery of DVB signals is standardized by DVB-S, and digital terrestrial transmission with DVB-T.

The standards can be freely downloaded from the ETSI website in the Standards page. ETSI, or European Telecommunications Standards Institute is -again- another standardization organization in the telecommunications industry, which also has a specific notation for there standards.

The amount of different organizations in this big business might be overwhelming, but having a few hints about how everything is tied together will most certainly help you understanding why the digital and analog audio/video is in its current state.

If you are willing to get more into this, I personally recommend the lurker's guide which presents a nice technical introduction to video systems for a programmer mind. Some good books such as Video Demystified by Keith Jack may also help.